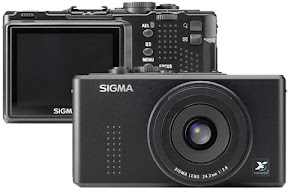 The X3F sensor offers excellent image quality with the added benefit of RAW format support. There is virtually no noise throughout the ISO range, only at the fastest JPEG setting of ISO 800, which left me wondering why Sigma chose not to include ISO 1600 and 3200 settings for JPEG as well as RAW files. Chromatic aberrations like purple and green-fringing, typically a problem in this class of camera, are simply non-existent on the DP2, testament to the excellent prime lens, which is also the reason for the almost complete lack of pincushion or barrel distortion, and the maximum aperture of f/2.8 is a very welcome improvement on the DP1. Just be aware that the quoted 14.06 megapixel resolution isn't comparable to a Bayer sensor, in that it creates much smaller 2652×1768 pixel images which you'll need to interpolate for larger print sizes.
/../
As with most cameras released in 2009, the Sigma DP2 has gone up in price in the UK, but strangely not the US, making it better value in some parts of the world than others. It's still an awful lot to pay for a compact camera though, costing the same as or even more than many mid-range DSLR cameras with kit lenses, and almost as much as the more versatile Olympus E-P1.

So while the DP2 is a fairly logical addition to Sigma's compact camera range, with a longer, faster lens and speedier, more intuitive operation, it doesn't really offer enough new features to compare favourably with the Olympus EP-1. And with this sector of the market set to expand before the end of 2009, Sigma have certainly got their work cut out..